skip to main | skip to sidebar

Jill Dearing
I live in Tasmania with my husband of 40 years and have a daughter in Melbourne and a son in Launceston. My interests are quilting, theatre, reading, gardening, travel. I work as a chartered accountant.

The peacocks are back - I haven't seen any in the backyard for a while but I managed to chase this one away the other morning. 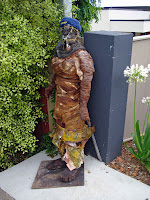 I started walking to work again this week - it's all to do with shedding those kilos that went on over Christmas. But I do see some interesting, not so beautiful and spectacular sights. These are some of the images I discovered this week.

A resident down the street where I live makes different objects - this "person" has been standing outside his home for a while - apparently some of the young children are terrified - looks like a good way to hide a dead body?? 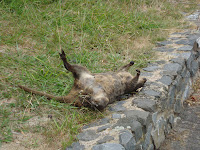 And talking of dead - here is some road kill I passed on the way - not a very attractive photo but I was trying to get down wind! And staying on the topic of "dead" this is a photo of the Tamar Basin at nearly high tide (further down you will see a photo taken at the same time only 2 days later). We have a real silt problem at the moment - when the tide is really low it looks like there is barely a trickle of water to sail on. Boats are known to become stuck in the mud. 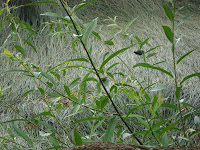 If you look closely at this photo you will see the native hens working in the rice grass which becomes visible at low tide. A couple of years ago a pair of swans used to nest in this spot but they have found a new home because of the situation of the river. 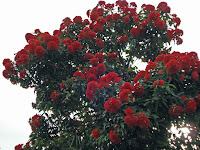 The next day I looked up, rather than down, and noticed this gum tree is in full bloom - I don't think ours is going to flower this year.


Then I spied this lonely sock and 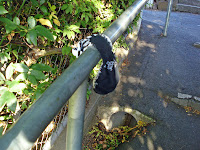 further along yet another - sadly not a pair so I left them there. 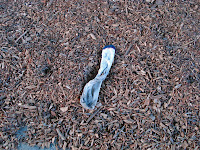 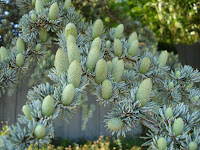 I must have walked past this tree many times but this is the first time I noticed the cone like foliage - beautiful. 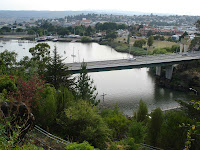 And the Tamar River at full tide - taken from half way down the steps I walk down beside the Gorge. 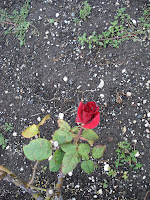 The Launceston City Council have beautifully kept rose gardens in the Royal Park which is close to the city - the bushes are about to burst into their second blooming.
Posted by Jill Dearing at 1:41 PM No comments: 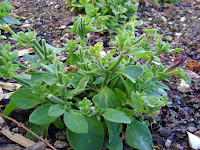 This is a little patch of our front garden - it shows that the theory of cutting back the flowers on a petunia plant lets it spread and produce more flowers. The trouble is all this has been done by nature - no I haven't cut back the flowers, although it certainly looks like they've been attacked with the scissors. The culprit is this little brute who lives in the front garden next door and some mornings there are some beautiful flowers but, alas, they disappear overnight! We had to put high gates either side of our house so at least we get some flowers in the back yard.

And I started and finished this quilt during 2007 - in one of my earlier posts there is a photo of the fabric I had chosen for this quilt. It is rather large so a bit difficult to get a good photo - it was machine quilted by Pam Jarman in Burnie and it looks really lovely on our bed. Posted by Jill Dearing at 2:32 PM No comments:

Another Week in Paradise

One morning this week I woke to this beautiful sight - unfortunately the colour of the sky was the result of smoke from a large bushfire burning near the coast. 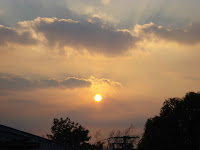 And on walking into the office one morning I spotted these bees working around the flower - I rather like this floppy looking flower - must try and get some for the garden. 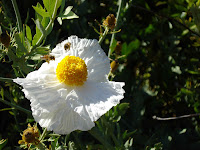 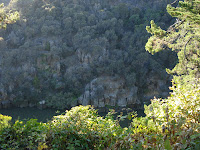 Further along I am privileged to look down into the Gorge - there aren't many people who can walk through this sort of scenery on their way to the office.
And then in the Tamar Basin the reflection of the boats was lovely. 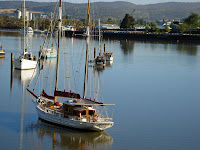 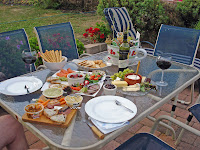 Yesterday I visited our local deli and the staff and I had great fun selecting all sorts of food for these platters which we enjoyed with a bottle of red last night. 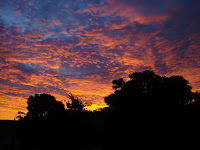 And I just managed to catch this glorious sunset.
Posted by Jill Dearing at 2:18 PM 1 comment: 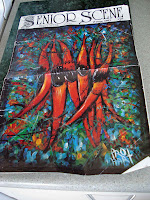 Back in 1993 I fell in love with a painting of Pro Hart's which was featured on the Senior Scene magazine that my parents received. I always planned to base a quilt on it.

In 2005 (I can remember because I actually made a label) I used the Ricky Timms method to create the background (I could have actually cut up strips and not bothered about using his method). I used 2 fabrics which had been in my stash for years - the lighter was a hand dyed piece I bought from Cat Stone (a scquilter) and the darker was a Nancy Crow fabric I thought I would use as the background for a Snugglepot and Cuddlepie quilt I might make for impending grandchildren. Well that never happened and I've grown away from that idea. 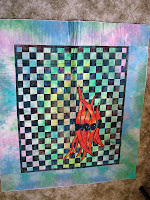 I then appliqued the Sturt peas - I think this may have been some of Lisa Walton's fabric but I can't be positive - and used a small amount of fabric pens to highlight them. At the time I was doing a class with Pam Holland and she added some white highlights as I didn't have access to a white pen.

This is the piece before I got to work on it today. 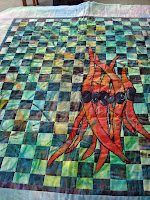 Then I bought some Shiva paintsticks which have been sitting in a box waiting for inspiration. Well today I pulled out the quilt and the paintsticks and drew all over the quilt to try and get a little of the effect of the original painting.

Once the paint sets (about a week) I will do some thread drawing and quilting on the piece and may even add some beads.
I think I may need to add more paint but I just want a hint of the painting as I'd like to maintain the original fabric look. But it has been fun so far - wonder which year it will be finished - am going to have to change the date on the label!! 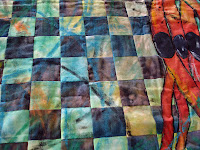