skip to main | skip to sidebar

Jill Dearing
I live in Tasmania with my husband of 40 years and have a daughter in Melbourne and a son in Launceston. My interests are quilting, theatre, reading, gardening, travel. I work as a chartered accountant. 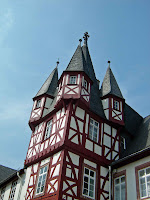 After the morning of gloating over Castles on the Rhine we arrived at Rudesheim. Our tour first took us to Bromserhof - the house dates from around 1300 and now houses Siegfried's Mechanical Music Cabinet - a wonderful collection of self-playing musical instruments, some of which are shown here. 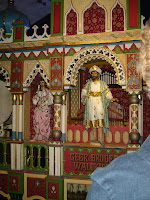 After playing with the musical instruments we walked down the hill a little way to a beer garden where we indulged in Rudesheim coffee and were entertained by the local musicians. The coffee was not your normal coffee!!!! And the musos did play Waltzing Matilda for the Aussies amongst us. 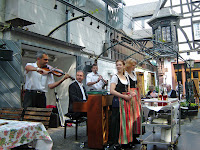 There is a small street in Rudeshiem which advertises that it has 2,300 seats for drinkers in their beer gardens - what a way to go!


And on a more sober note the Adlerturm was build around 1500 for storing gunpower (apparently today it holds the money of one of the banks)! 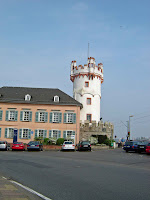